soft, charismatic, incredibly appealing boy.. his kind and gentle manner makes him a magnet for other dogs..  and humans!!! He is happy to greet and befriend all canine mates!!
​male / 1-2 y o / 55 lbs
Super crazy gorgeous.. handsome sweet hunk of a boy.. BAILEY is a one in a million dog.. His light eyes are mesmerizing and the gentle slightly insecure dog that he is shines through clearly. He is LOVE.. he is chill.. even when he is a wee bit uncomfortable its almost like he is comfortable in his uncomfortableness!! He knows just how to work it out if you give him the ability to do so.. On his first day here with us he was definitely uncertain about pretty much EVERYTHING! Even so he watched.. he waited.. He never panicked or retreated.. His eyes were wide and his body language begged for space and time. It was easy to see he was in fact wanting to move forward with his curiosity but he needed to watch.. It wasn't long before he accepted a leash and almost with a bit of relief agreed to move out into the farm.. his gate was swingy and his smile wide!! He was thrilled to walk the entire farm and even thought a stroll into the bordering woods would be a great adventure!!

Now, about a week in, Bailey has a large fan club. He has even acquired a "group" Baby Roxie.. just 3 months old .. she is his shadow and can be found attached to any part of Bailey! Under him, over him, beside him.. but always with as much physical contact as she can muster!! Poor lil pup arrived to us  completely shut down .. only wanted to disappear! Between Bailey and Lana and now Miss Cora.. Roxie has found a safe place to travel forward on a leash & deal with unexpected sounds and sights along the way ! Roxie finds safety in her pack of friends cheery love bubble and will go anywhere they go!! Says a lot about the essence of Bailey! 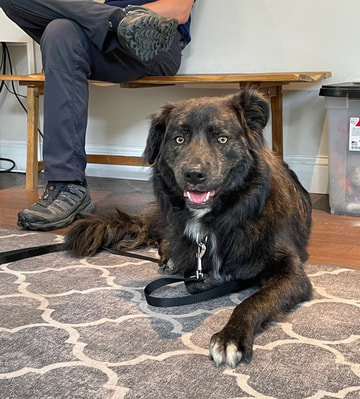 UPDATE:
Bailey has spent a few weeks at the farm and he has had quite a bit of time to truly "bloom" ..  and boy are we more in love with him then we ever thought possible! In the mean time, he has been helping us with a few of our other troubled doggies that we almost want to hire him!!! Bailey has been a great support for out "fearful pups" Cora and Roxy.. they follow Bailey's lead and he is happy to show them the way!

Bailey will need a home with some patience and understanding of his gentle nature. This boy would truly never hurt a fly. He is eager to connect with humans and dogs alike. He would LOVE a home with another dog and people who are around a lot during the day to be able to make him a focus in their life. He deserves the absolute BEST! 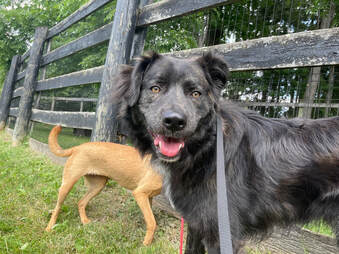 Bailey enjoys being in calm company. Whether that is outdoors exploring, walking, playing.. indoors lounging about.. or just laying beneath your feet while you work at your desk, he likes to be near, seen and included. We have found that Bailey is quite chill.. pretty much all the time. He is not what we would call "hyper active" at all. He enjoys peace around him and will give off that peace in return. Bailey will not do well in chaos.. that would surely disrupt his inner balance. A predictable space is perfect for him!

As we talked about above, Bailey loves having doggie friends. He loosens up around other dogs and is a great match for young dogs. Stay tuned for more updates on sweet Bailey and if you'd like to come meet him, fill out an application and shoot us an email!
​
Click here to fill out an Adoption Application