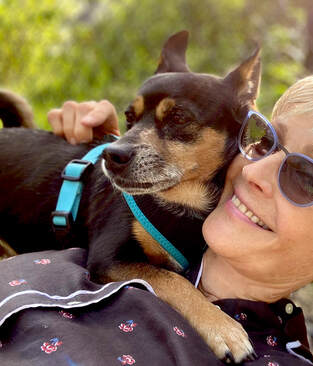 Genghi... The little dog with a big dog brain! He sort of looks like a miniature GSD!! He arrived with his gal pal and so delightfully in love with her! He was her play buddy, body guard, sleepy time cuddles and let her do whatever she wanted. Genghi has some "dude" antics with certain dogs.. usually big males.. he acts tough but the truth is he's actually a bit insecure... We are helping him to make new friends and gain more confidence around the big boys!!

There is so much goodness in this darling, happy boy .. he's very handsome and proud.. a wonderful mix of curious, independent ( with back up ) yet more than anything Genghi craves the company of his loved ones. He isn't a goofy Lab type who will love and accept everyone... no no! Genghi is discerning and somewhat particular about people! He adores those he fancies.. accepts others who are happy to coexist and dislikes the forward, in his face types. Genghi requires respect!! No grabbing or snatching him up like a little toy... (though he is so darn cute its very tempting to scoop him up and snuggle him!)  Genghi is so in-tune with you. He so enjoys and craves the company of his people.. when with people he trusts and loves, he melts and becomes this sweet brown and black cuddly love bug.

Gengsl eagerly takes direction when given guidance.. especially when politely requested.. or if the directing comes in the form of a fun game! He is all in!! G loves to engage and enjoys clicker training and getting praise and rewards for being a good guy! He is a watch dog... alerts us when there are intruders.. lets a dog across the street know when they are inching into his territory or being so loyal (to a fault) that he sometimes becomes protective of his house.. Genghis is a " boss gap filler"!! LOL!! So he will be his best with a happy leader type human. Chaotic, busy and unpredictable environments are not his jam.. This dude likes order and routine. Wants to know his place and wants everyone in his clan to know as well!!

Genghis does get along well with dogs that he has had time to meet and settle with.. he enjoys having dogs pals &  shared a home with several. He was a key member of his original home pack and while he fusses at some big boy dogs he adores his female friends! Currently he hangs out with Jewel, Greta and Gracie! He has had really good relationships with several other male dogs.. a bit more his size! He's had and continues to make great friends with many dogs here at the farm! It's so fun to see him let loose and play with them all day!

Playful wonderfully engaged and food driven Genghis masters clicker and trick training! He is is all in for adventure.. the more the better.. he likes going for long walks, he can even handle 3-plus mile hikes without skipping a beat. also up for brisk hikes... Big dog in a small body!!!
If you're looking for a FUN... funny, active, adorable yet regal little dog with some sass.. think GENGHI! He will brighten up your life with his hilarious antics and sweet nature.
Click here to fill out an Adoption Application