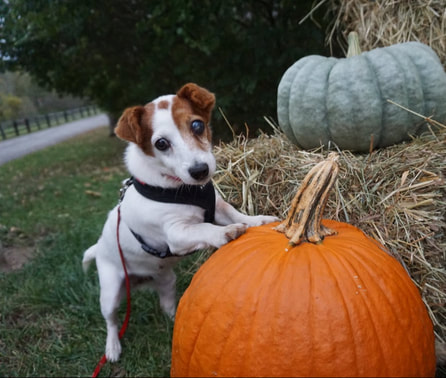 So Darling is GiGi in her temperament, manner and appearance its impossible not to fall in love with her!! She goes for joy full on.. running boldly through the fields switching from a trot to a gallop!! Though one of her eyes can't guide her path, her nose and inherent confidence do!! We are always so inspired by the dogs who come with special challenges. GiGi seems to be almost if not completely blind.. She does not care a bit! This happy go lucky girl is determined to live her best life!! We will find out more about her vision and post along with other updates but for now.. as far as she and we are concerned... not a problem! 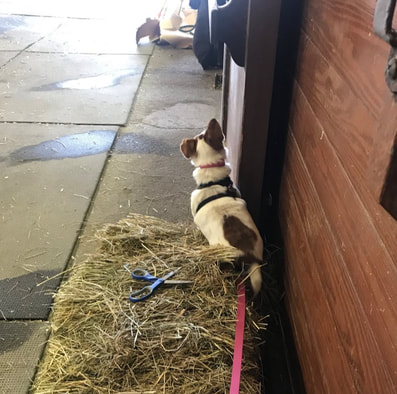 ​Gigi is sassy, lovable and super adventurous! She loves to explore new territories and is not hesitant to enter new buildings, doorways or fields at all! Gigi came alive when we entered the horse barn.. she immediately jumped up on a bale of hay searching for.. something! She rolled in the shavings meant for the horses and truly could not get enough jumping, weaving, nosing her way through! Maybe she was some sort of barn dog in her previous home situation?! We aren't sure, but we can tell you that Gigi is as active and fun as ever even in her senior years! This lovely girl will endlessly provide laughs and smiles to the humans that surround her.. she is like a little global explorer!!
GiGis colorful coat is sooooooo silky, soft and her pudgy, round body so cuddly!! Loving's on GiGi is addicting!! She has a look of wonder on her little face that is so childlike it makes you smile with affection!! She's wonderfully social and completely at ease in her own skin!
GiGi had a little eye issue.. so we took her to the doggie ophthalmologist She had scratched her eye and required drops .. GiGi was a superb patient, didn't even mind wearing the big plastic cone!!  Her eye is feeling much better! 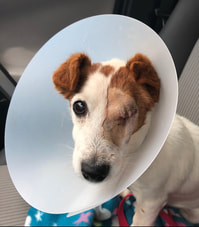 UPDATE: Pain from glaucoma was worsening in her eye so we decided to have Gigi's "bad eye" removed. She did remarkably well during surgery and her recovery is uneventful! Gigi seems relieved to say the least!! Now Gigi has a permanent WINK and we are completely smitten!!
Click here to fill out an Adoption Application